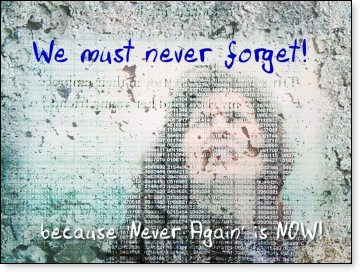 All photos that appear on the site NeverAgainIsNow.com are actual untouched photos    All the pictures belong to me and I have the full rights to all of them.

1. Donald Trump at his Long Island book signing I attended

4. Ted Cruise picture taken by Susan Rosenbluth, Editor Jewish Voice and Opinion of NJ on a mission to Washington, DC

5.West End Republican Club of PA taken by a member

17. Holocaust Survivors of Riga taken by  a member

18. Holocaust Survivors of Brooklyn taken by a member